The mission of the Lanesboro Public Library is to promote the power of knowledge, encourage the discovery of ideas, and instill the joy of reading. 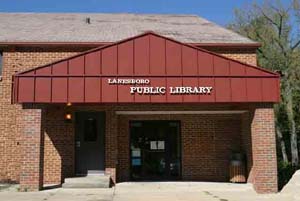 Tara has served the Lanesboro Public Library since September of 2010, after spending 4 years working as director at West Union Community Library in West Union, Iowa. She received her B.A. from Augsburg College in English Education. After graduating, she went on to work as the Mabel-Canton Public Schools’ Media Specialist for 11 years giving her over 20 years of experience working in libraries.

The Lanesboro Public Library Association was formed by a small group of women in 1927. At this time, the library consisted of two cupboards of books located in the women’s lounge of the Community Hall, eventually moving to the basement of the hall in 1938 and then the Village Hall.

In the early years of the library, funding came from both individuals and fundraisers. In 1939, funds were raised by creating a cookbook. In May 1941, tragedy struck. A fire caused the Community Hall to burn down, included all the library holdings that had been contained within it, around 4,000 books. As a result, the library moved to the Old Fire Hall. Support from libraries all over Minnesota as well as individual donations of books allowed for the formation of a new library collection.

In 1994 the library returned to what is now its current location in the basement of the Community Center, which was also its location in 1932. The space was renovated in order to provide for the expansion of the library and its services- which now includes 6 desktop computers, a wide range of fiction and non-fiction for all ages, magazines, movies, and several programs for adults, teens, and youth.